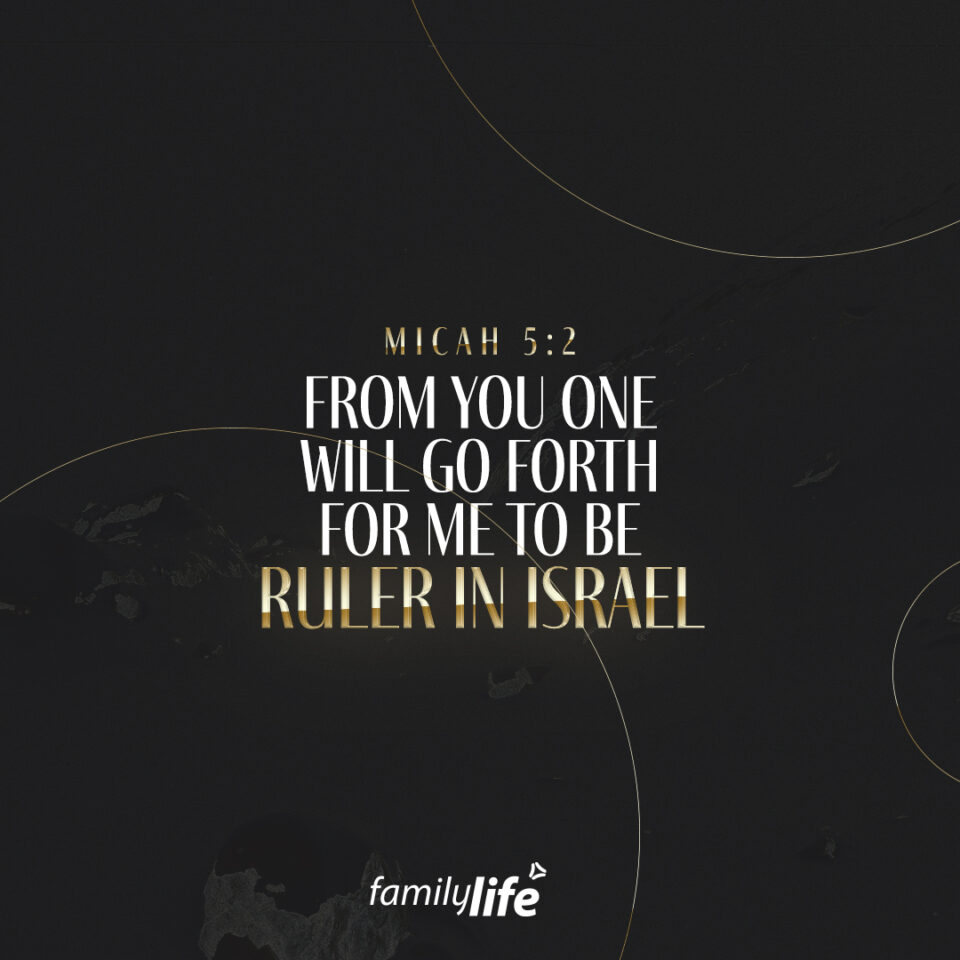 Tuesday, December 7, 2021
The prophet Micah foretells the coming of Messiah.

Micah 5:2 But as for you, Bethlehem Ephratha (EFF-ruh-thuh), too little to be among the clans of Judah, from you One will go forth for Me to be ruler in Israel. His goings forth are from long ago, from the days of eternity. (NASB)

When the magi came seeking the birthplace of the baby Jesus the chief priests answered them by quoting this prophecy of Micah given 700 years earlier! Over and over in Scripture, God glorifies Himself by bringing forth great things from the most unlikely of places. Bethlehem was an insignificant stop on the road from Jerusalem – but it would forever be exalted by this promise that it would be the birthplace of Messiah!

John Piper notes that God is not impressed by big-ness. After Old Testament King Saul was disqualified as king, God’s prophet turned to the little town of Bethlehem. Among the fine strapping sons of Jesse: it was not the oldest, but the youngest who was anointed. When Goliath cursed the God of Israel, it was not the tall, imposing King Saul who went out to fight — but a young shepherd boy. When David fought the giant: it was not with royal sword or shield, but with a shepherd’s slingshot. When all seems lost — do as Micah did — trust the promise of God that a deliverer is coming! 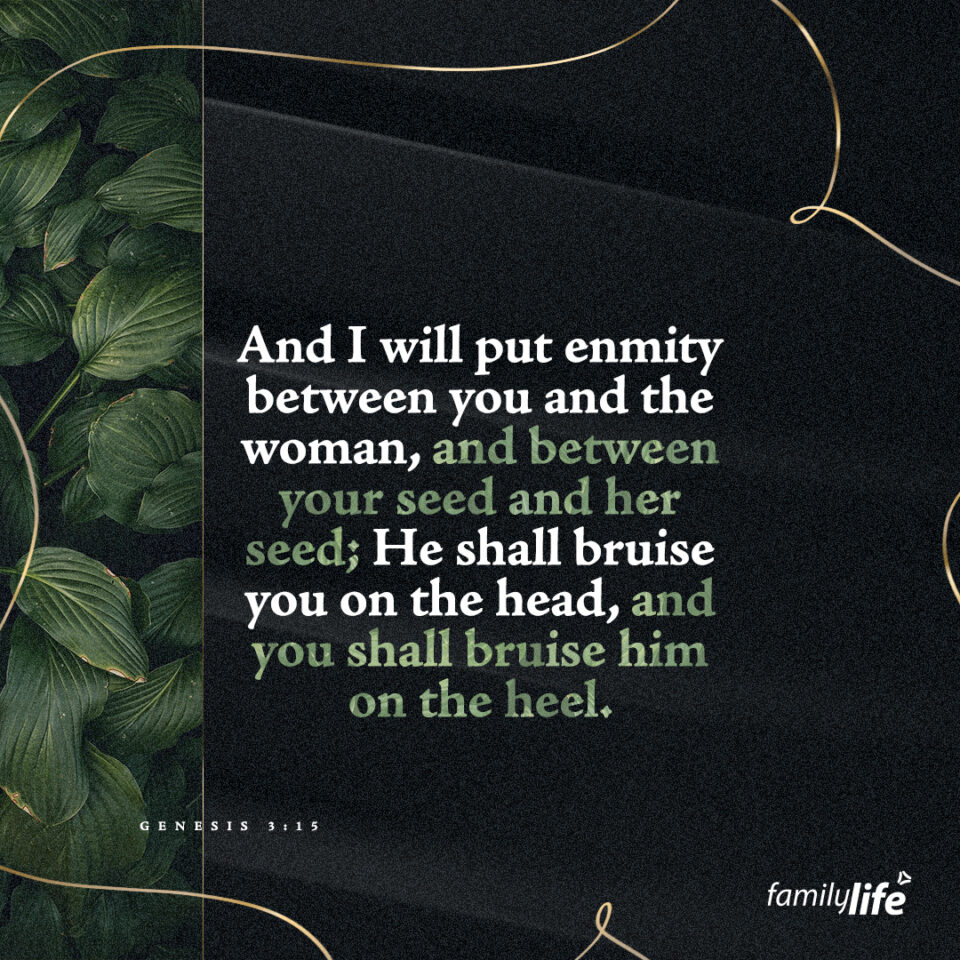 Monday, December 6, 2021
In the account of Creation, Moses records the first promise of Christmas.

Just 3 chapters into the creation account is the response of God to Satan’s attack on Adam and Eve. Sin has come into the perfect world of God’s creation, and God must preside over a courtroom in Eden. Mankind is not going to come out well in this – the verdict for disobedience was death, and death it would be.

“But God” … I love those words! But God comes to the rescue of humanity and becomes their deliverer: promising a Savior … the seed of a woman. People ask when it comes to being “saved” – they ask, “What from?” The answer is here. As all humanity has fallen under the sentence of death for Adam’s sin – here God foreshadows His Son’s coming to satisfy the law’s demands. On the cross — Satan bruised the heel of Christ; in the resurrection — Christ crushed the head of Satan. 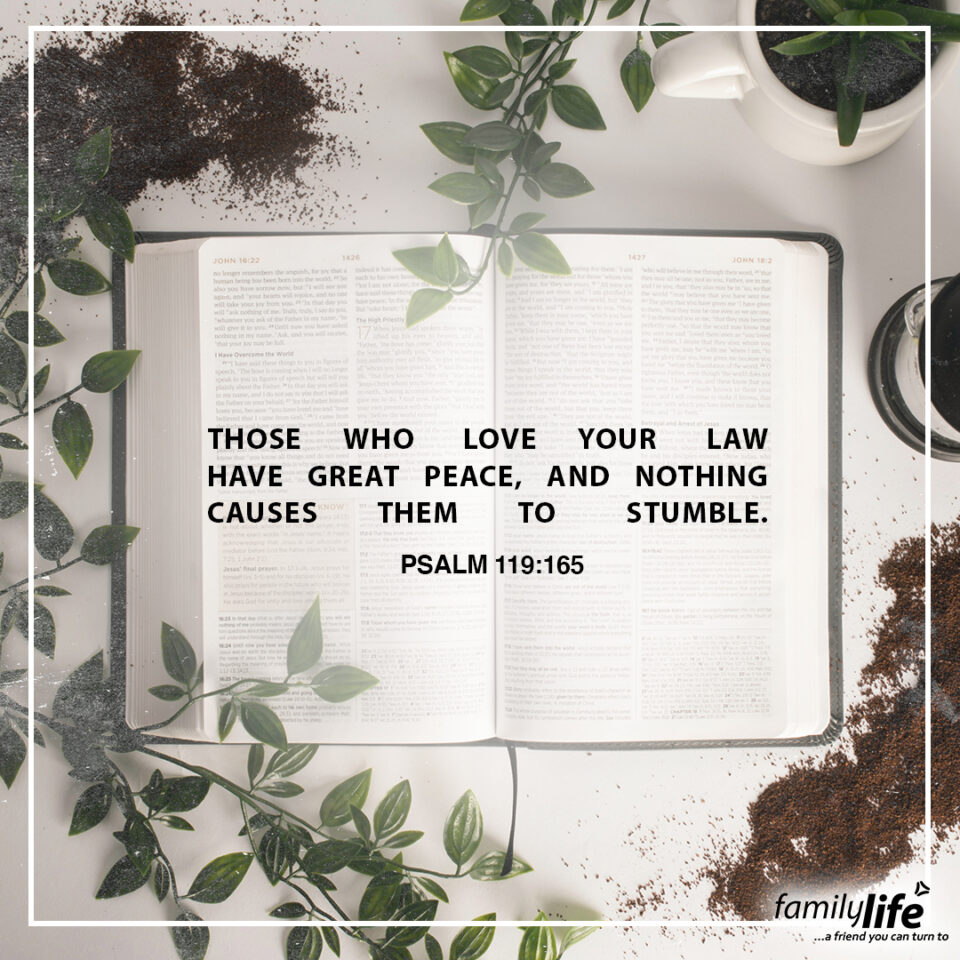 Friday, December 3, 2021
The Psalmist writes that those who trust God will find peace in the face of difficulty.

Psalm 119:165 Those who love Your law have great peace, and nothing causes them to stumble. (NASB)

When you love God’s will above all else: peace will dominate you completely. Elisabeth Elliot, the missionary speaker who inspired so many by returning to minister to the Ecuadorian natives who martyred her husband Jim – developed dementia in her later years. Her husband, Lars Gren, wrote about Elisabeth’s trust in God’s saying, Elliot handled dementia just as she did the deaths of her husbands. “She accepted those things, [knowing] they were no surprise to God, It was something she would rather not have experienced, but she received it.”

Steve Saint – son of Nate Saint, one of the other missionaries killed alongside Elliot’s first husband – had this Facebook posting at [Elliot’s] death: “I think Elisabeth would be happy just being remembered as not much of a woman that God used greatly. To the rest of us she was an incredibly talented and gifted woman who trusted God in life’s calamities, even the loss of her mind to dementia, and who allowed God to use her. He did use her.” Nothing God allows to happen to us can jeopardize the eternal inheritance God has in store for His children. Find peace in God’s sovereign control of every aspect of your life! 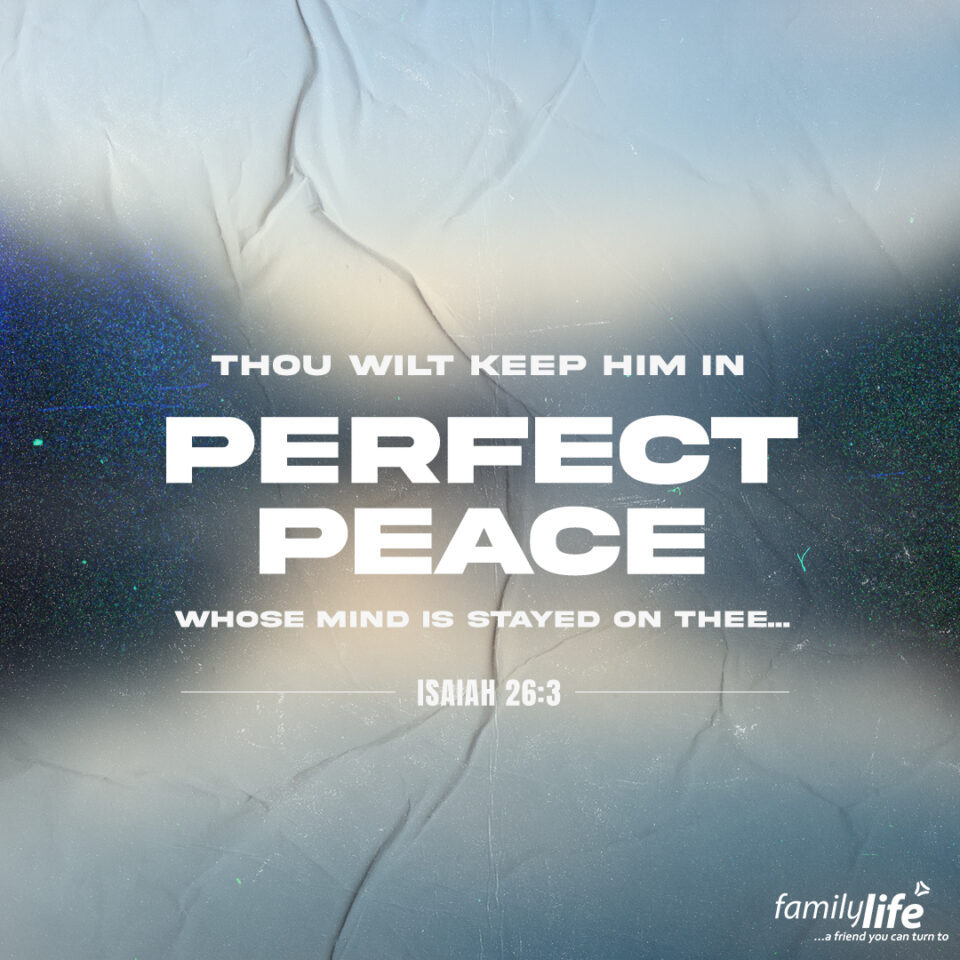 Thursday, December 2, 2021
The prophet Isaiah says the reward for consistently focusing on God’s provision for daily life is perfect peace.

Isaiah 26:3 Thou wilt keep him in perfect peace, whose mind is stayed on thee: because he trusteth in thee. (KJV)

The power of Almighty God is so overwhelming and irresistible that worry cannot exist in the same space! Peace is the prevailing attitude in the throne-room of God. Woodrow Kroll explains the idea of “perfect peace” as like a double portion of peace. Remember Elisha desired a “double portion” of his mentor Elijah’s spirit?

Christ-followers remain serene and steadfast during confusion — because the Savior never wrings His hands and wonders what to do! There is no problem too great He cannot solve; no circumstance that He cannot overrule. The way is plain for the one who will simply place their trust in God with all their heart! 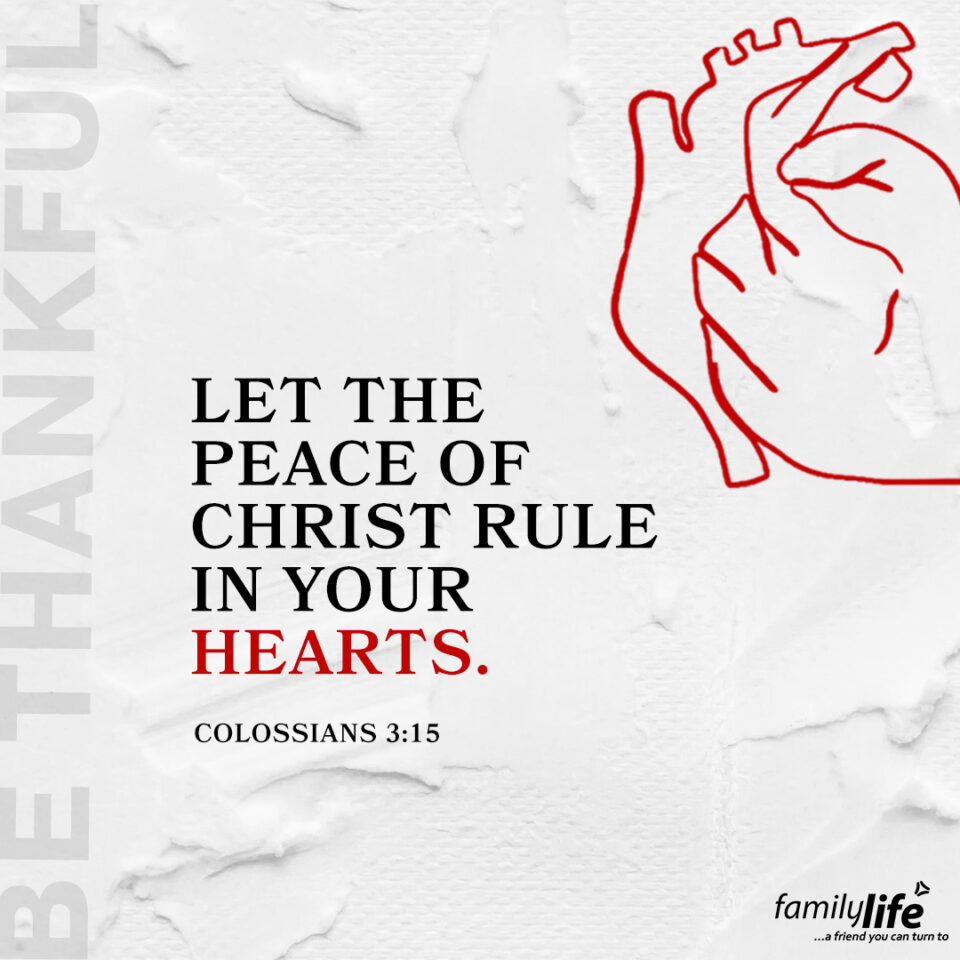 Wednesday, December 1, 2021
The apostle Paul calls Christ-followers to guard and preserve the peace of God.

Colossians 3:15 Let the peace of Christ rule in your hearts, to which indeed you were called in one body; and be thankful. (NASB)

One of the qualities of a Christ-follower is a peace that keeps us even tempered, through whatever comes our way. Satan will tempt you to give up that tranquility and indulge in negative emotions like anger, wrath, lust, etc. You can feel the peace of God being tugged at by these emotions! Hold on tightly and resist giving in to Satan’s temptations. The picture is of an umpire at a sporting event: let the peace of God make the decision as to where you go emotionally. Anything that tempts you to give up your peace should be resisted.

The apostle Paul calls Christ-followers back to an attitude of gratefulness! God loves us “while we were still sinners”; not by our righteousness which is like “filthy rags”. What do we enjoy as a Christ-follower that we have not received? Cultivate thanking God every chance you get, and you will develop a strong sense of contentment 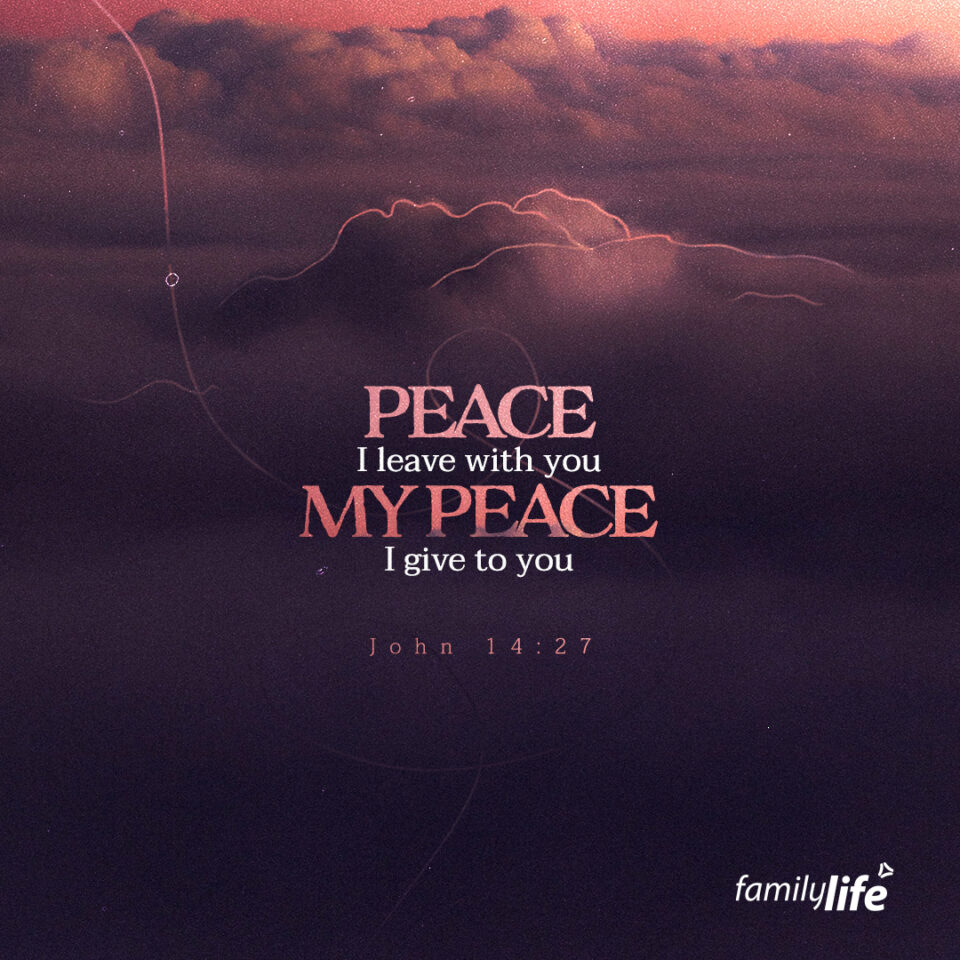 Tuesday, November 30, 2021
The apostle John records Jesus’ words about how the birth-right of a Christ-follower is His peace.

John 14:27 [Jesus said] Peace I leave with you; My peace I give to you; not as the world gives do I give to you. Do not let your heart be troubled, nor let it be fearful. (NASB)

There is peace and there is the peace that Jesus gives! As human beings you can lose your peace when you violate one of God’s timeless principles – when that happens, conflict begins. There are distractions that can divert our attention for a while, but when we are alone with our thoughts . . . the conflict starts up again!

This verse is telling you there is a peace that passes understanding. Albert Barnes describes this peace as one that, “meets all the wants of the soul, silences the alarms of conscience, is fixed and sure amid all external changes, and will abide in the hour of death and forever.” It’s a peace that provides the ability to handle the stresses of life. How wonderful that because you are a child of God, it is His Spirit that gives you this transcendent ability to cope!