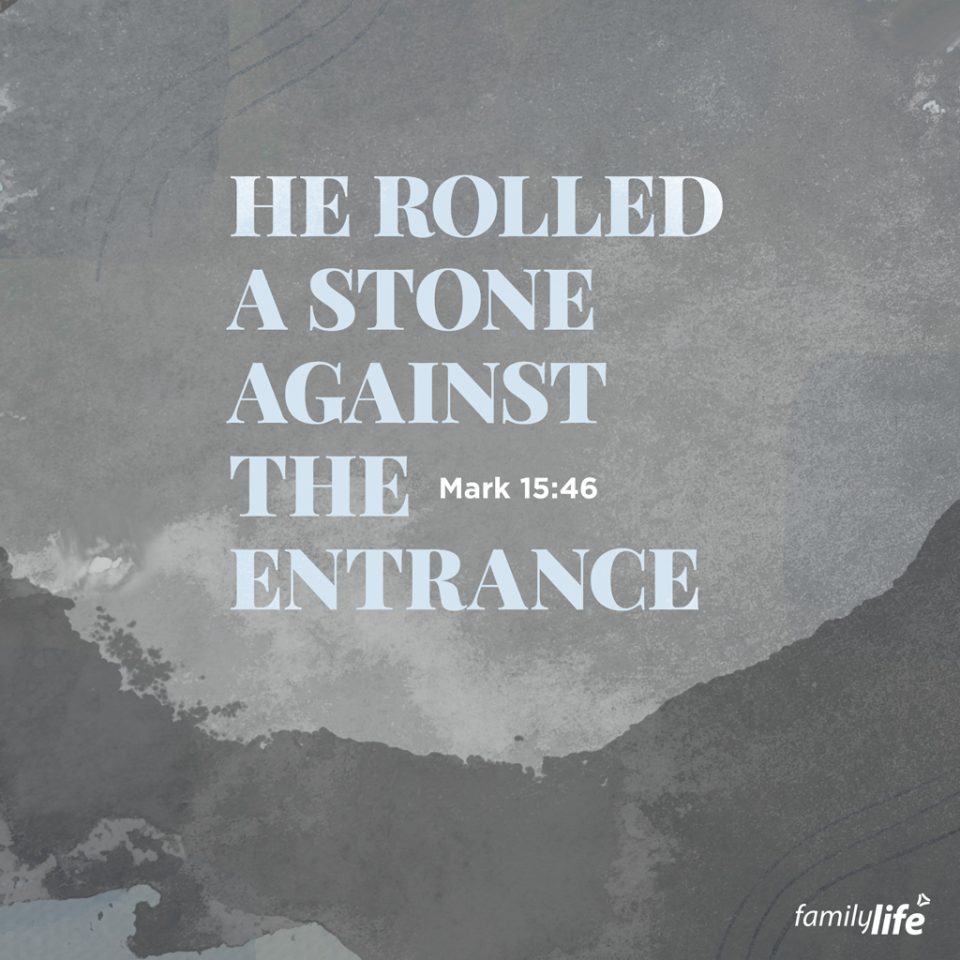 So, Joseph bought some linen cloth, took down the body, wrapped it in the linen, and placed it in a tomb cut out of rock. Then he rolled a stone against the entrance of the tomb.

Joseph of Arimathea was a wealthy man, and a disciple of Jesus. When the Savior was crucified and killed, it was Joseph who gave His body a proper resting place, wrapping the lifeless form of Christ in linen and sealing the tomb with a stone. Grief, hopelessness, and fear were in the hearts of those who had known the Messiah, whom they thought had come from above to free their people from Rome. None of them had yet realized what Jesus meant when He had promised to rebuild the temple in three days. Soon, God’s children wouldn’t need a physical temple to come before Him; only faith and a willing heart. 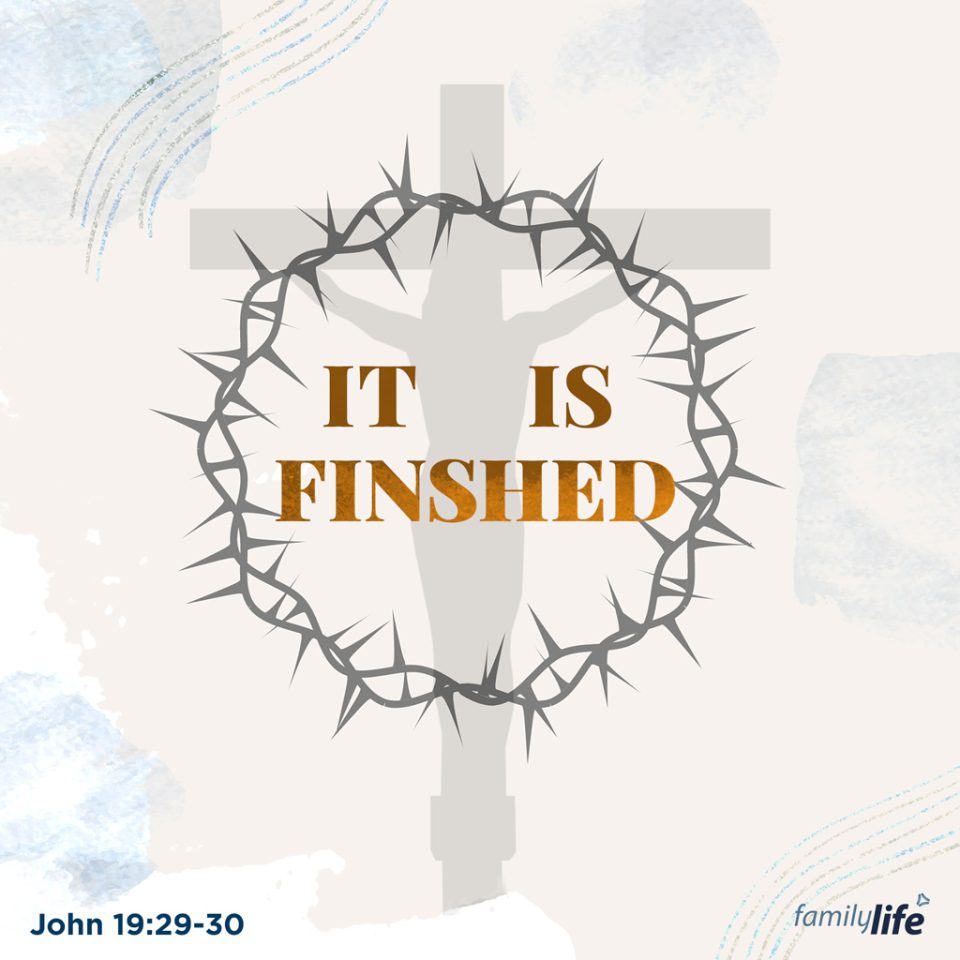 A jar full of sour wine stood there, so they put a sponge full of the sour wine on a hyssop branch and held it to his mouth. When Jesus had received the sour wine, he said, “It is finished,” and he bowed his head and gave up his spirit.

Jesus fulfilled many prophesies about the Messiah during his lifetime, but the most important ones were fulfilled during his death. He was hated without cause, His clothes were divided by the casting of lots, and He was given vinegar to quench his thirst. These events and more had been foretold in the Old Testament, and by allowing His own creations to do their worst, the Lord finished what He had started. The Son of God was tortured, crucified, and given a crown of thorns, but through the agony, it was love that held Him there… and when it was finished, the Messiah breathed His last. 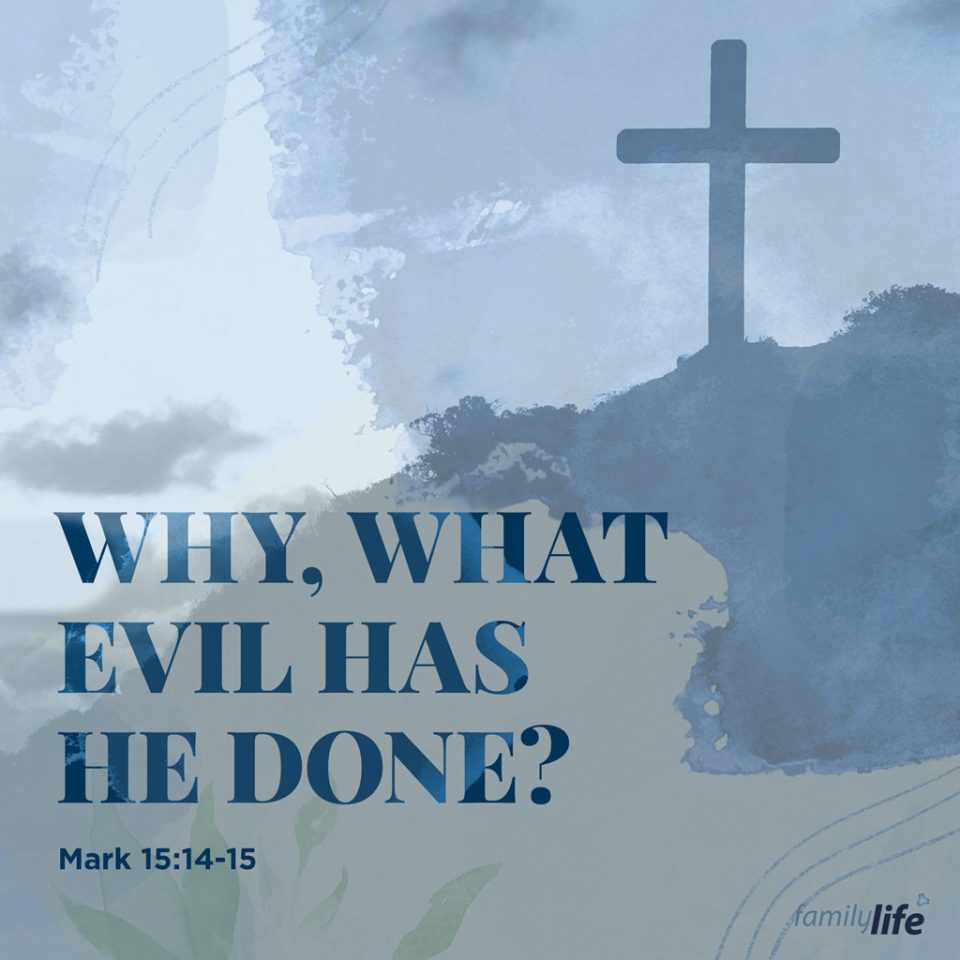 And Pilate said to them, “Why, what evil has he done?” But they shouted all the more, “Crucify him.” So, Pilate, wishing to satisfy the crowd, released for them Barabbas, and having scourged Jesus, he delivered him to be crucified.

Punishment by death on a cross wasn’t a fate that Jesus deserved. He lived a blameless life, healing the sick and preaching truth to anyone who would listen, but in the end, He was still nailed to a tree. Even Pilate couldn’t find fault in Jesus of Nazareth, but, bending to the will of the people, he traded Christ for a murderer and allowed the King of the Jews to be crucified. What makes the death of our Savior a sacrifice like no other is that He was the last person who deserved it. He was the perfect Lamb of God, and like a sheep He was led to the slaughter, to pay for the sins of mankind. 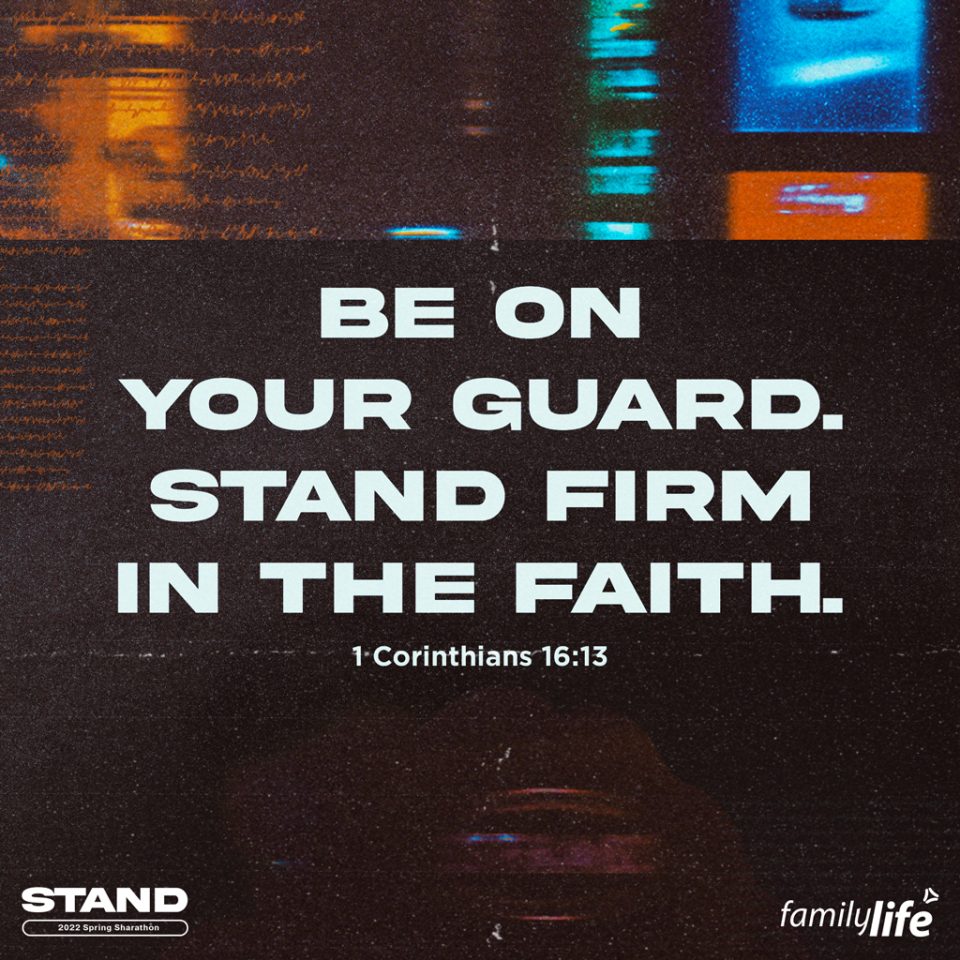 The God of the universe, the Creator of heaven and earth Himself is on your side. Even while you were a sinner, He sent His son to die for you so that you would never have to be separated from Him. You know this is true… so what reason do you have to be afraid? What is left to fear? As Christians, we should be the boldest people on earth, knowing that our Father holds everything in His hands, and that because of Him, we have already won. Nothing can take away the grace and love you have found in Jesus; so be courageous, be strong, and most importantly, stand firm in your faith. 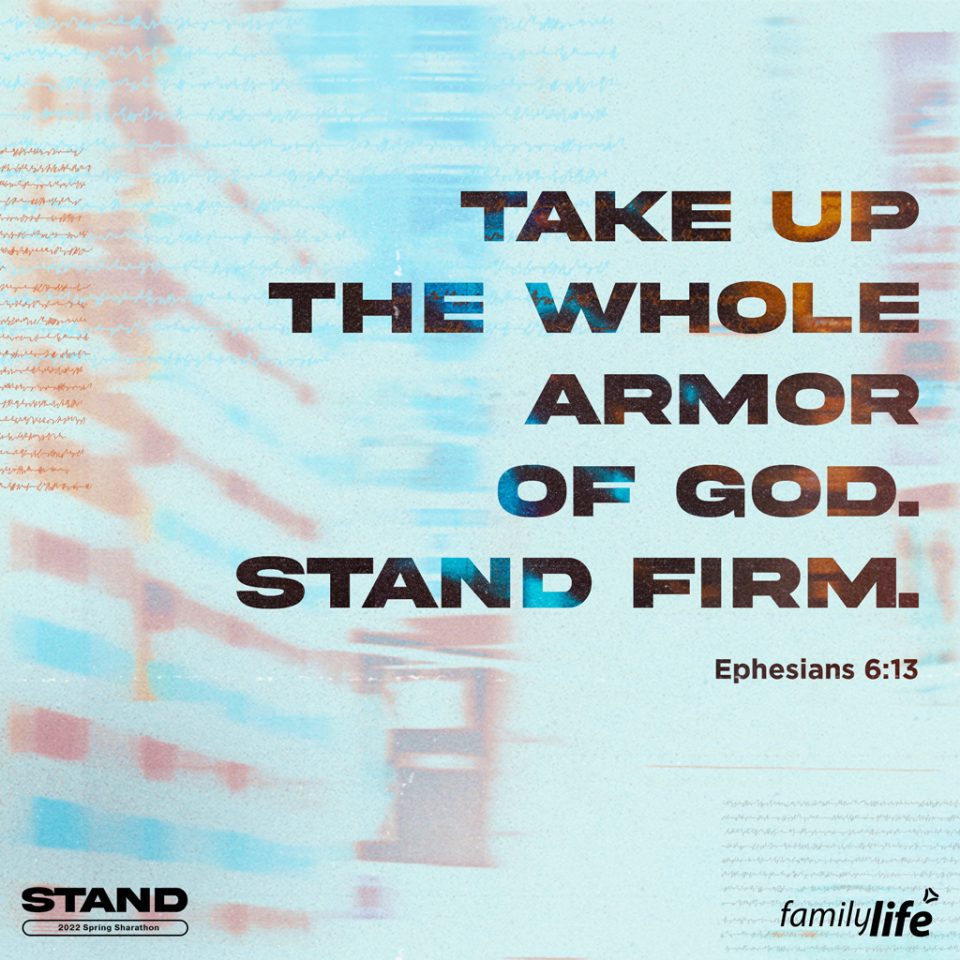 Thursday, April 7, 2022
Ephesians 6:13
Therefore take up the whole armor of God, that you may be able to withstand in the evil day, and having done all, to stand firm.

It’s true that we live in a hostile world, corrupted by the lies and distortions of the enemy. But as laborers for the Lord, paid for by the blood of Christ, we stand by the one truth even when the world despises us for it. A day will come in all our lives, however, when we are challenged. The Word tells us to put on the full armor of God, so that when that day comes, we can stand firm in our faith. God has not left us in a broken world unequipped; with the power of the Holy Spirit and the love of Christ living in us, we can overcome. 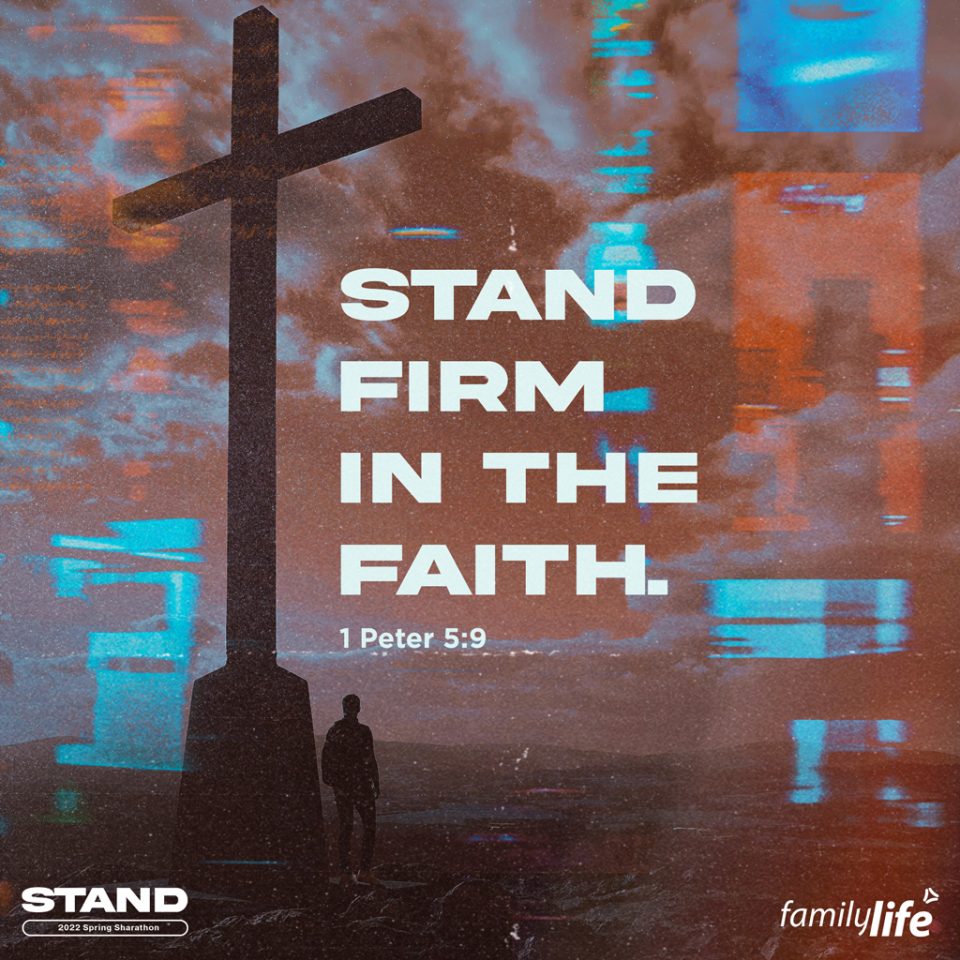 Wednesday, April 6, 2022
1 Peter 5:9
Resist him, standing firm in the faith, because you know that the family of believers throughout the world is undergoing the same kind of sufferings.

It’s an unfortunate reality that the fallen world we live in hates the God you serve. Throughout history, those who love the Lord and profess the love of Christ have been persecuted. The bible tells us that we shouldn’t expect anything less from the world, but also that we as Christians are a light in the darkness, and where there’s light, there’s hope. You are not alone, and it’s important to remember that as you are working for the Lord, there are others working alongside you who know the love of the Father. Believers are called to stand firm with each other, so that even when the world shows it’s hate we’ll all be in it together.