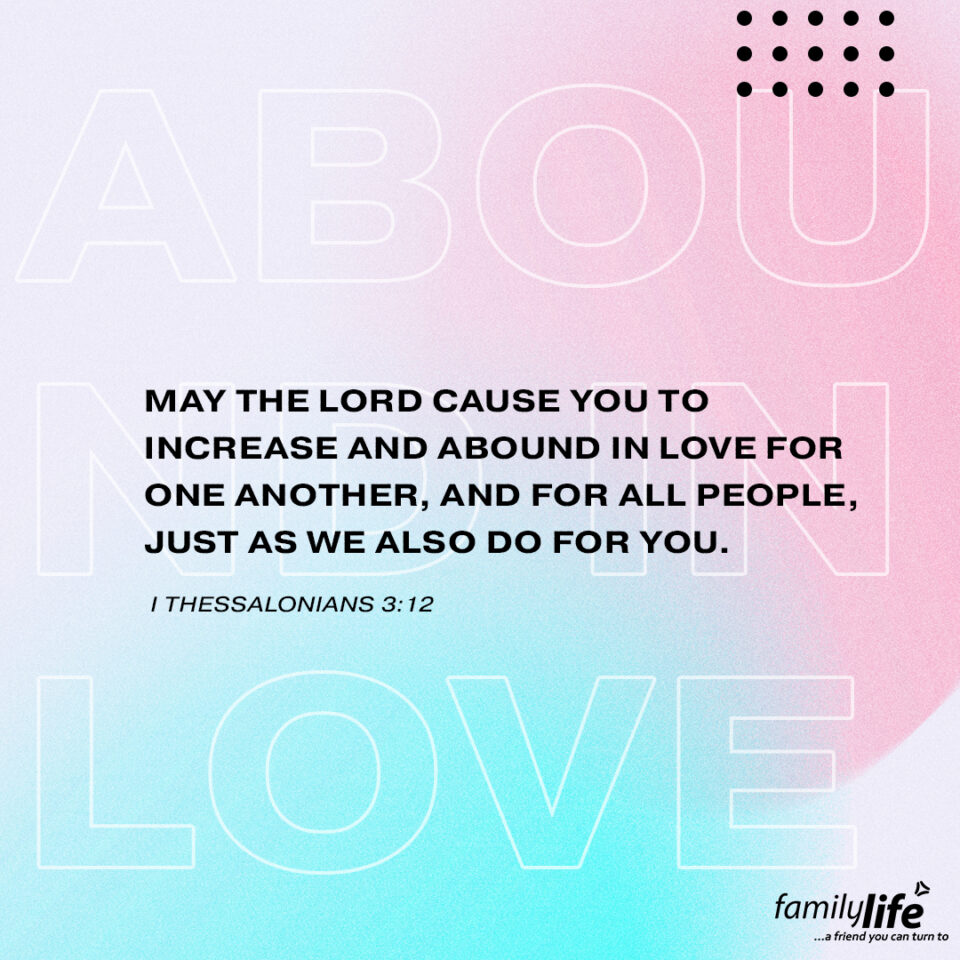 I Thessalonians 3:12 May the Lord cause you to increase and abound in love for one another, and for all people, just as we also do for you; (NASB)
Christ-followers are not to be static in their relationships. There is no point at which we can rest on our laurels and feel we “have arrived”, in our desire to live as Christ lived. We are either growing more like Him – or not.
The context for this prayer was the persecution of the Thessalonian church. Paul’s emphasis was showing the love of Christ to not only other believers — but also to those outside the bounds of faith. Not just that – but a Holy Spirit supplied, unconditional love . . . growing, increasing to all humanity – including the persecutors! 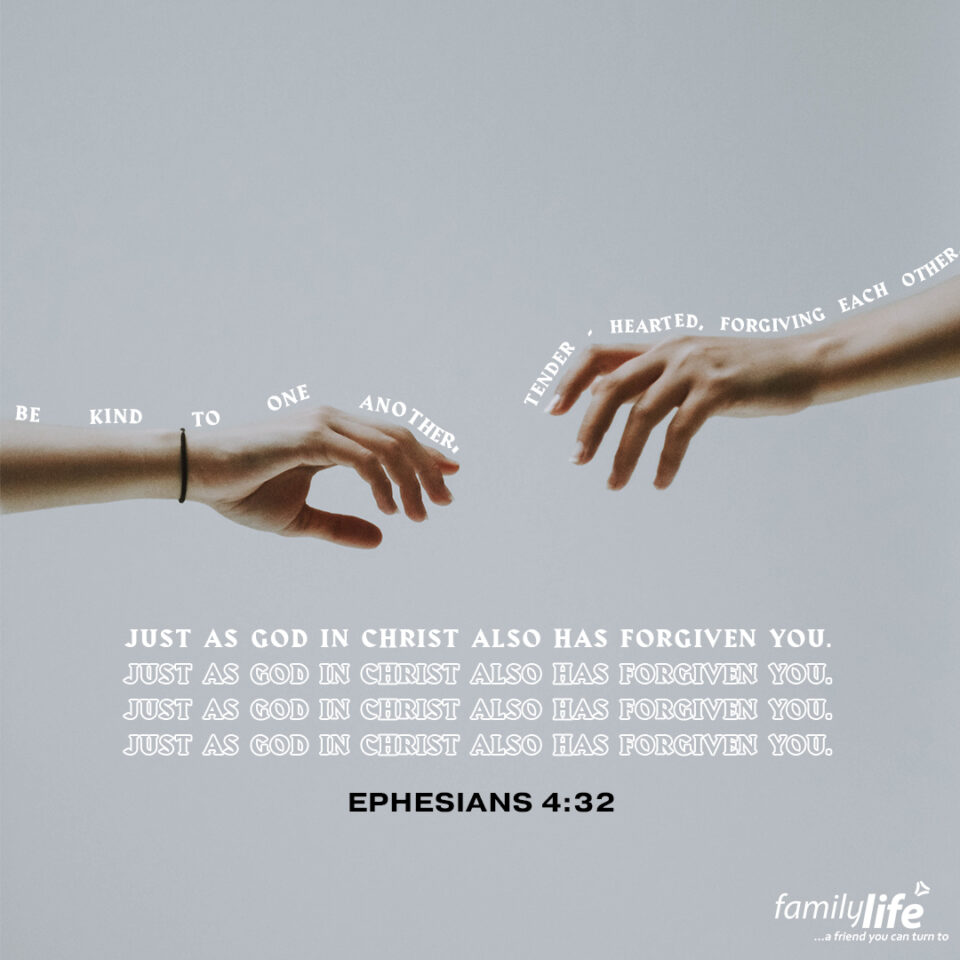 Tuesday, November 16, 2021
The apostle Paul writing to encourage Christ-followers that they are a united body and need each other.

Ephesians 4:32 Be kind to one another, tender-hearted, forgiving each other, just as God in Christ also has forgiven you. (NASB)
Funny how such little things can come between you, friends and family. Misunderstandings can mushroom into all-out animosity! It’s easy to become so isolated and self-centered that you don’t care to reach out in kindness to restore a relationship
In college a friend came into the dorm fuming and saying he could “never” forgive the person who had offended him! We’ve all felt that way, but Christ is our example: “while we were still sinners, Christ died for us.” Forgive, as you have been forgiven. 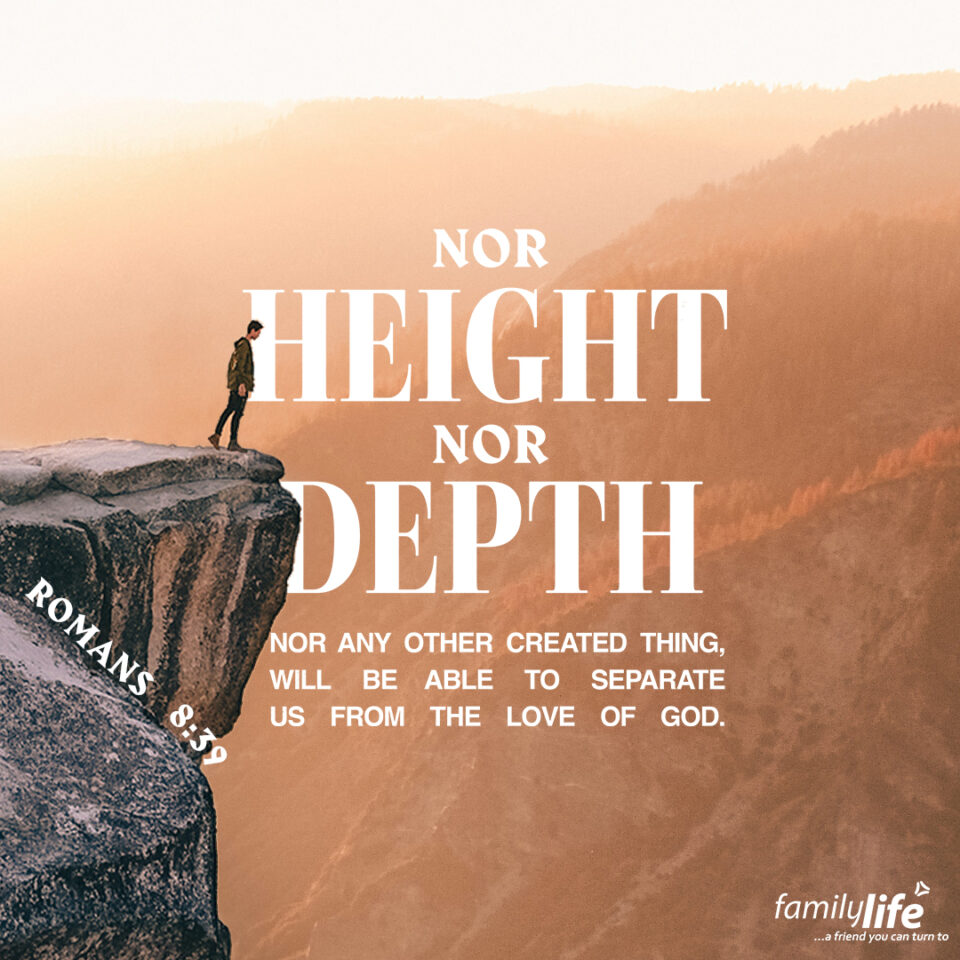 Monday, November 15, 2021
The apostle Paul writing about the security Christ-followers have in the Savior.

Romans 8:39 Nor height, nor depth, nor any other created thing, will be able to separate us from the love of God, which is in Christ Jesus our Lord. (NASB)
Any number of situations can make you feel very alone and abandoned. At times like that it’s important to be intentional about choosing to believe what God said in His Word about you and His love. No disappointment, no failed relationship or job can separate you from God’s love.
Human friends come and go. Some are there when things are going well but are nowhere to be found when the chips are down. Jesus is a friend that sticks closer than a brother! 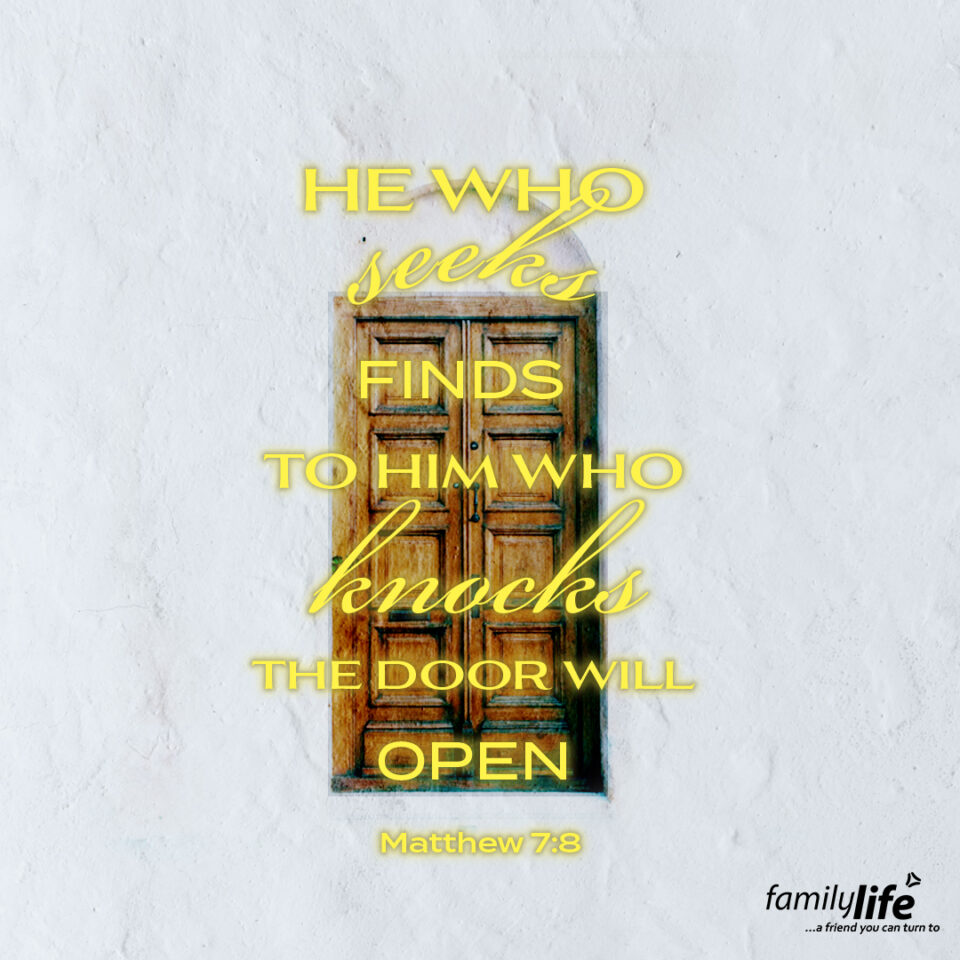 Friday, November 12, 2021
The apostle Matthew records Jesus words of prayer from the Sermon on the Mount.

Ever hear of a person living abject poverty who died leaving behind millions of dollars they hoarded . . . but never used! Christ-followers scrape along with their sins forgiven – and yet experience no power for daily living because they never pray for it. Grasp the reality that everything needed for living a godly life has been provided to the Christ-follower — but we must take some of that spiritual capital and use it!

Let’s be more specific: the God of infinite power is bending over backwards in this portion of Scripture asking His followers to pray. When the Bible or our Lord repeats something it’s for emphasis! He says: “Ask”, “Seek”, “Knock” Three times God invites us to talk to Him. God wants . . . no, commands us to pray! No, every prayer is not delivered on your door exactly as you requested it! God already knows what some of us have learned — that not every prayer request is best for us. God is not a divine vending machine: but if you’re willing to trust Him when He says “No” or “Not now” then you will find He is far more willing to say “Yes” than you could imagine!

The image in the verses that follow is that of God as “our heavenly Father”! Does a loving earthly father give you everything you ask for? Of course not. But do they long to answer your requests? I believe the key is to surrender your desires to God . . . trust Him . . . want what He wants . . . and the scope of your prayers will be more aligned with what God wants to give you and your prayer life will take off! 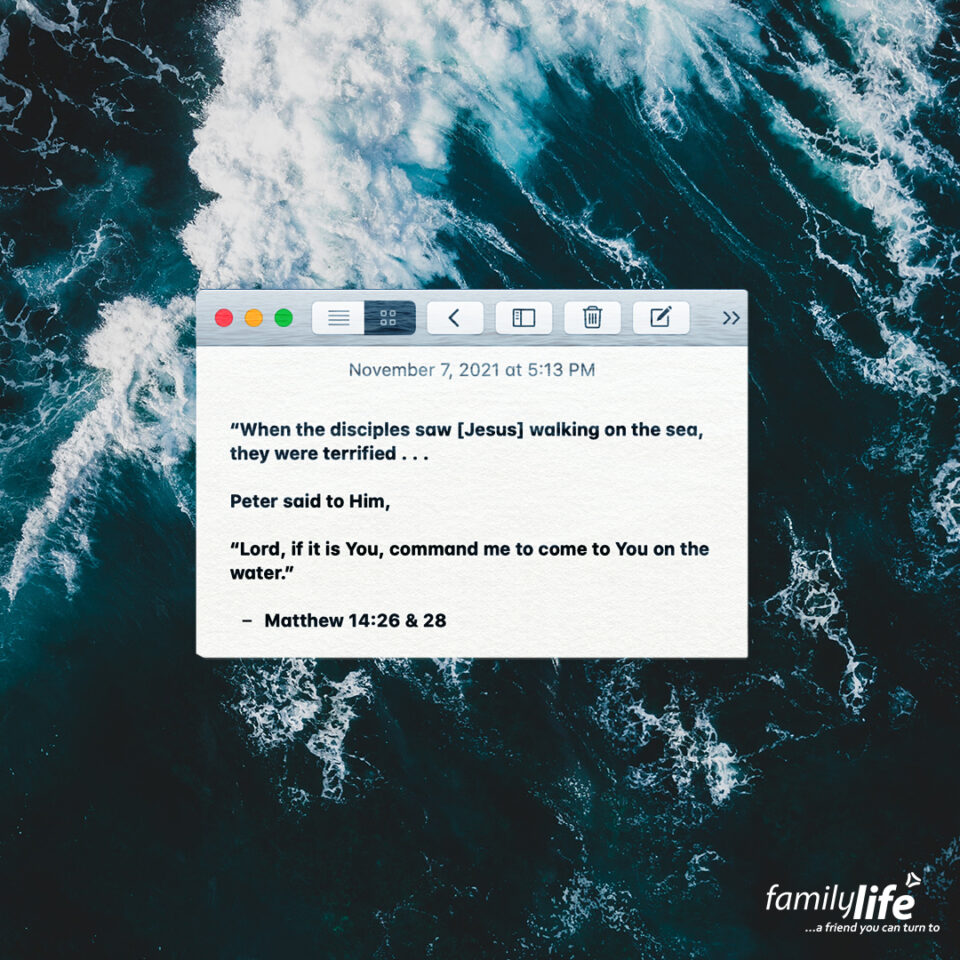 Have you ever found yourself squarely in God’s will . . . doing what He wants you to do – and the bottom drops out of everything! Christ-followers in the 21st century
want a God who will keep them healthy, help them retire comfortably, and enable their kids to turn out alright! God is committed to one thing when it comes to His followers . . . making them like Himself!

In this passage, Jesus sent His disciples ahead of Him across the Sea of Galilee. When they obeyed, they found themselves in a terrible storm: a journey that should have taken an hour took 8 hours!! In Mark’s gospel it reveals, meanwhile, Jesus was on a mountain nearby praying and watching their toil. Finally, between 3 and 6 am He came to the disciples walking on the water! They were terrified and Peter, who often spoke first and thought later, is at his best and asks that he might come to Jesus walking on the water!

No one else in the boat exercised such great faith . . . and make no mistake Jesus loves it when we pray big! Having faith to walk on the storm-tossed sea, Peter, went wrong when he got his eyes off Jesus, and onto the winds! Perhaps Jesus knew all along Peter would sink? But I believe the disciple was a different man that the one who stepped out into the tempest! He had walked on water – unforgettable – but believe me if there was ever a next time, he would remember to keep his eyes on Jesus, who reigned supreme over the wind and the waves! 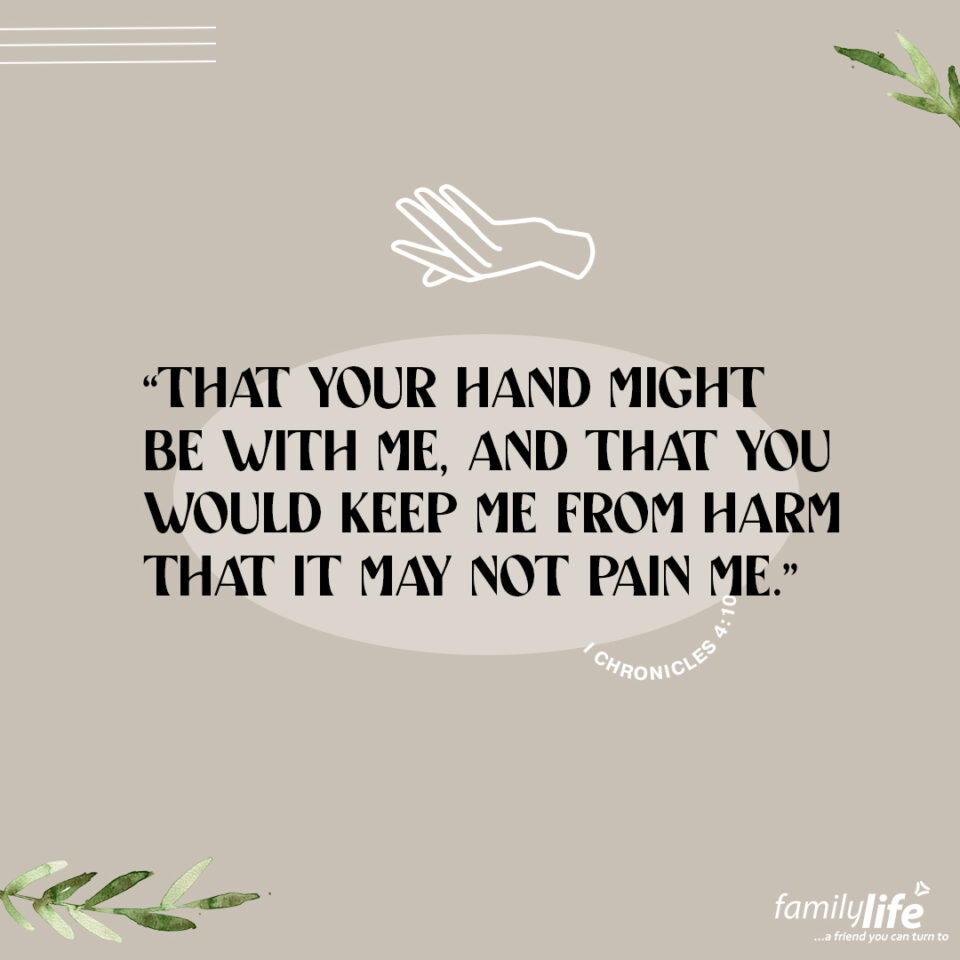 Prayer is the God-ordained means by which the resources of Heaven may be accessed to supply the needs and difficulties of life. Although Christ-followers are commanded to pray; it is a resource often left untouched. However, if prayers are lifted God always answers prayer: the answer may be Yes, No or Not now.

Jabez is a man whose names means “pain”. There are many reading these words that can identify . . . your life is marked by pain. What can be done? Have you spread your circumstance before the Lord and cried out to Him? I believe the pain of Jabez was the motivation God used to develop his prayer life.

First, Jabez leverages the Abrahamic covenant, by praying to the “God of Israel”. God’s promises are a great place to begin in prayer because whatever God promises – He fulfills. Next, Jabez prays that God would bless him . . . indeed! I take this to mean over and above what he needed that he might bless his family and needy friends. As Chronicles is the genealogy of Israel note there is a mention of a mother but no father. At the least it suggests a single parent family and Jabez wants sufficient blessing to stand in the gap and meet not just his need but those of others.

“Enlarge my borders”, commentators suggest that Jabez’s family may have somehow lost their families inheritance in the Promised Land. Jabez wants to reacquire what has been lost! Next, Jabez prays God’s hand would be with him
— something that was true of Joseph. Even in prison, falsely accused . . . God’s hand was with Joseph. So Jabez suggests that in-spite of the hardship that has befallen his family he desires God’s hand to remedy the situation: God’s way and in God’s time.

“Keep me from harm” This request reveals a play on words. “Lord, keep this family problem from being a ‘Jabez-kind-of-pain’ in my life. Jabez was drawing a line saying whatever sin or weakness might have beset my family – with God’s help it will not be part of mine”.

The result of this feisty man of prayer? “God granted him what he requested.”