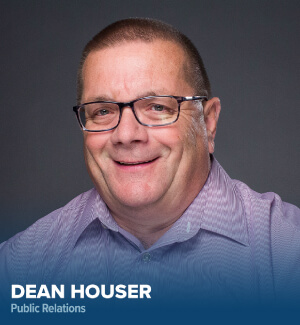 Dean’s first contact with Family Life was at Selah’s Christmas Tour in 2002. A short time later, Dean met Randy Snavely, who then worked as a PR rep. While they talked, Dean’s interest in the ministry grew, and he soon decided to start volunteering at events. Dean says, “Being a volunteer really opened my eyes to how God changes lives through the ministry. I remember having a strong urge to tell more people about Family Life and what God was doing.”
|
Well, that happened to be the Lord’s path for Dean! Now he works at Family Life as a PR representative, maintaining relationships with area churches and Christian organizations in different regions of New York and Pennsylvania.

Dean accepted Christ in junior high school, but after graduating, turned away from the church and wandered aimlessly for several years. Life eventually changed after he married and started a family. Shortly after the kids came, Dean and his wife, Karen, agreed that going to church again would be a good thing. At that point, Dean wasn’t aware of how this decision would end up changing their lives.

From 2006 – 2017 the Houser’s worked as short-term missionaries in Uganda, Africa, alongside other national workers, to help break the cycle of poverty in the communities. The Lord has poured out their lives for the children and families of orphanages, schools and child development centers. There’s no limit to God’s grand work when he uses totally surrendered lives!

Also a retired Corrections Officer for Chautauqua County, Dean worked in the sheriff’s office for almost two decades, and still serves the town as a volunteer fire fighter. Dean also served as Mayor of the Village of Sinclairville, NY for 12 years, which makes him the first former public official Family Life has ever employed!